Lion Springs Lavender Farm was built in 1833, long before the California Gold Rush, (just one year before the secularization of the California Missions) by a brave pioneer named Graeme Harry Wynne.  Wynne was a galant hunter who used to protect the Catholic friars who rode along the old Carmel Valley Road on their asses (ahem, donkeys) from the Mission Soledad to the Carmel Mission. One day, while cooling off in the Carmel River after a hard day of hunting fierce wild boar, a local Native American girl showed him something shiny in the water…he found gold and struck it rich in the Carmel River, earned his fortune, and built the farm near the same spot on the river where he found the gold, hence, he painted the farm yellow.  He then got married to the beautiful Eselan Native American woman, named Marisa, daughter of the high chief, who spared Graeme’s life after Graeme saved his only daughter from a starving mountain lion who sprang at her (hence the name “Lion Springs”) with his Winchester gun, and then they had 12 children with three sets of twins named Methousala, Bazooka, Eureka, Victoria, Alexander, Jesus, Ghandi, Mohammed, Madonna, Larry, Mo, and Curly.

Just kidding, that never happened.  Actually, I saved my money my whole life and I built the house myself.  But I thought you’d be more apt to believe that above story than to learn that a boring single woman built the house by herself…me.  I know that sounds ridiculous in this day and age but you wouldn’t believe how many folks and contractors kept looking past me and asked “where’s your husband” and ” you’re building this house by yourself, little lady?” (However, my final chosen contractor, Anthony, was very cool and did a great job building the house!)  Plus, even more people said, “you’ll never be able to build a house…much less one here in Carmel.”   Well, I don’t know how, but somehow, I kept trying, and I did it.  They say perseverance is genius…  I’m not a genius but if you want to think I am that’s ok with me.  And finally, no mountain lion sprang on anyone…I call my farm “Lion Springs” because I was so impressed that I saw a mountain lion, and plus, there’s an underground spring here …how original…now you know why its called Lion Springs Lavender Farm (besides, I couldn’t think of anything else that starts with the letter”L” for an alliteration with “lavender”.)

I tried to make the house look like a California country farm house and I built an art studio in it because I love to paint.  I wanted to do something productive like have a business that does some good in this world to save an endangered species after all the bad that we humans do, hence, I love mountain lions and would love to help them survive. It would be terrible if they because extinct in our life times when we could have done something about it. Plus, I love lavender and wanted to share it’s calming health benefits with others.  So, I combined all my loves. There. That’s it. That’s my story. That’s the illustrious history of Lion Springs Lavender Farm. 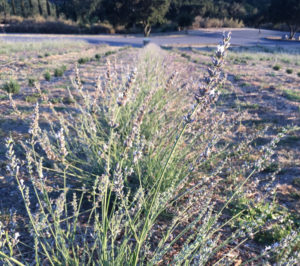